We had a very big day yesterday which basically consisted of going to Toowoomba (my home town - well, city really) to attend a friend's wedding.

It started off very well (and early considering the late night on Saturday) with a breakfast with Tarlee and Brad. They have been mentioned on here before and should expect to continue being mentioned on a reasonably frequent basis. Tarlee is a great friend from high school who married one of the coolest and friendliest guys I know. Aidan was there, as was Hannah and Laura (of course).

Tarlee and Brad had stayed the night at our house and were in Brisbane to attend the wedding of Bec (another one of my favourite high school people) and Asher (A friendly and well educated American - wow I hear you say. Yes they do exist). Laura made a great effort and put on a fabulous spread to start the day off well. 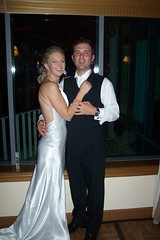 Once breakfast wound up at around 9:45am we headed off for Toowoomba - first stop morning tea (turning into lunch) with Laura's grandparents. We had a very relaxing morning checking out some old photos and newspaper clippings and generally enjoying the spectacular autumn weather. Before we knew it, it was time to get ready for the wedding ceremony we had come to see - that of Keturah and Mark. 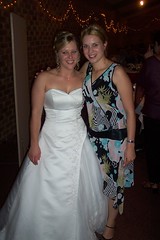 It was great to see two people so in love. People joke about getting sore cheeks from all the smiling for photos required on your wedding day, but Keturah had her smile on all day, and it wasn't for the photos - she was just that happy.

The reception was winding up at about 10.00pm and we decided that was a good time to make a move for home. We could be home and in bed before midnight. Things then took an unexpected and unwanted turn when we discovered that someone had caused fairly heavy contact to occur between the car's passenger window and a brick. The result was a broken window and the perpetrators then seem to have taken the opportunity to steal a bunch of our stuff.

I am a very calm person as a general rule and it takes a fair bit to get me angry but the more I think about it the more and more it PISSES ME THE HELL OFF that someone would do this. All up they probably took about $500-$600 worth of stuff (mostly Laura's too - the bastards). When you add that to the repair costs on the car and the new locks on the house (they got Laura's wallet and keys) and the $200 worth of gift voucher Laura had in her wallet we are probably out well over $1,000. I'm pissed off that we have to pay money to replace stuff and get my car fixed but I'm really, really, really, really pissed off that we simply CAN'T replace some of the stuff. A lot of the stuff taken was purchased on our holiday and you can't just drop into Paris and pick up a new handbag. I hope that it will show up somewhere. Some of it is the kind of thing that wouldn't be of value to anyone else (like a Harrods diary - semi used).

These sorts of things also bring out the best in people and bring people closer together. At the time, we were with a friend from high school, Cassie and her (reasonably new) husband, Brett.

They were just wonderful, and couldn't have been more comforting, helpful and selfless after the event. Brett (who I had only met a couple of times before) spent at least - an hour carefully and diligently preparing plastic sheeting to cover our window for the 100km odd trip home. It was still noisy but made so much easier (and warmer) by his kind efforts. And with out even asking her Cassie got the vacuum cleaner straight out and started cleaning up the glass (our car may never have been so clean). When Laura got home this afternoon she found a beautiful bunch of flowers sent from Cassie. 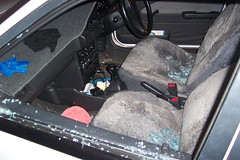