Ho hum. Probably naïve of me, but I had no idea how focused London is on the finances of the world. UK television, newspapers, current affairs shows every single day are dominated by news of all the bank collapses and money woes and recession talk. It’s all a bit doom and gloom at the moment, isn’t it? For the first time in my life, I’m also in an industry (recruitment of all things) where people lose their jobs and lose them quickly. No fat cats at all, but people like secretaries, accountants, help desk workers, consultants and techies I was friends with, were among those quite suddenly told that their jobs no longer existed. It’s really sad and has been quite stressful for a lot of people in a lot of places.

Simon and I have been really fortunate and certainly feel lucky about our jobs. Simon has done the opposite and told his design agency that he is, in fact, leaving them to come back to Oz. And I have been given a sort-of, kind-of promotion, which I was really flattered by and so grateful for. No pay raise, as it’s probably a bit cheeky to ask for one of those. But I have been given extra things to work on and I continue to work with lovely, laid-back people. I have even tried my hand at helping to create some web pages for our company's intranets around the world. Fellow web developer Simon went through a range of emotions: horror, amazement, eventually a lot of pride and even a little envy at my two-day-old skills I think.

We have had a really great month. I celebrated my 25th birthday with the best birthday I’ve had in years. Lovely friends Geoff and Terri somehow found my office and had a bottle of Moet delivered directly to my desk the afternoon of my birthday. As is the custom in my office, I supplied my colleagues with treats, and my pricey imported Tim Tams were exceedingly well-received. I found a restaurant housed in a former chocolate factory in my favourite area of London, the Southwark and Bankside neighbourhoods. So I had some great food and several and various drinks with friends old and new. I also received so many lovely cards, messages and parcels from home. And a great big sloppy kiss from Charlie. 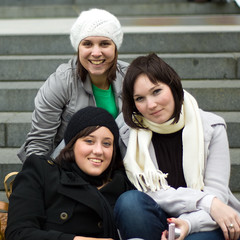 Our friends Ellie and Mary – we knew Ellie from high school – are on a fantastic two month trip through Canada and Europe and our lounge room. They’re now in Switzerland, but will be back again at the end of November. We’ve had a great time and have loved being able to show them our favourite haunts like the Borough Markets. Other wonderful friend Moogs left London for good for sunny Queensland (really, really sunny Blackall to be exact.) I already miss her. Moogs and I had a ball together here and she has always managed to remind me of home. Now we can’t wait to have Nathan to visit – only a couple of weeks til he arrives. We’ve figured out that we actually have less than three weeks left with just the two of us in the house. The rest of it is booked up!

One awesome show and one less than awesome one. The official Shakespeare’s Globe season ends in October when summer has gone, and the theatre is cold and darker earlier. After the season they put on a range of winter shows, including a show that I really, really wanted to be good! The Burial at Thebes is an adaptation by Seamus Heaney based on one of my favourite plays, Antigone. It was supposed to be great: the play made into an opera - my second one ever – the Globe, a cushion, maybe even a brownie, etc, etc. We also had two of the best seats we’ve had in our five visits to the Globe this year. You’ve probably figured out how this story ends and it isn’t happily ever after all the way home. Simon really didn’t like it, I tried to focus on the good parts (there were indeed some), but I found myself frequently surprised when the singing would start up. Why don’t you just speak it?! I yelled inside my head. It’s a really good play! Just play it!

At the other end of the spectrum is the big musical Wicked, which has been to New York and Melbourne among others, and is probably one of the most popular musicals in London. I’d heard all but one raving review of the show and the all but one people were right. If you get the chance to go, you must go! The musical is based on a novel that was written in 1995 as the 'untold story' of the witches in The Wizard of Oz. Oh my goodness, it just has such a clever script, amazing costumes, excellent performances and a good message that didn’t whack me over the head with its teachiness. It was a really intelligent and fun show and I wish I’d written it.

Another craving for the countryside and the scones it promises meant that we took a train trip (only forty-eight minutes) up to Cambridge on Saturday with Bec and Aaron. Simon and I had stopped in Cambridge when we were here in 2004, but in 2004 it was cold outside and I was in the thick of The Da Vinci Code, so we stayed inside instead. What a mistake. I was pleasantly surprised to find Cambridge to be even nicer than lovely Oxford. It feels more expansive, with lots of big green lawns, strangely called ‘pieces’ and with more to see in general once you get past all the regular Cambridge things to see. We found some cute shopping spots, our beloved cream tea, as well as fish and chips overlooking the punters on the river. A perfect sunny autumn day.

Sadly we missed seeing my handsome little cousin Daryl marry Terrianne in Redcliffe on the weekend and I am eagerly awaiting photos. A big happy birthday to the father of Charlie, my brother-in-law Tony. And sorry about the opera comments, Uncle Alan, who is surely furious at me from somewhere inside a mine in South Australia. Thinking of you all and hoping you’re happy and well. Much love, Laura and Simon.