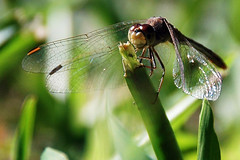 I've been having a Flickr Fest over the past couple of days. I've discovered how much more addictive it can be when you start joining groups and contributing to pools. I've really taken a liking to the Judgement Day group because they've given me some really valuable and useful feedback on a few of my photos. Not only that but there are some photos in there which are just wonderful beyond description1.

There is also some wonderful street art exposed to the world via Flickr. Without Flickr I may never have heard of the Listen Bird. It's art like this that gives graffiti a great name. Something a little closer to home (which I've mentioned before) is the group dedicated to capturing Brisbane's Traffic Signal Box Art. There is heaps more street art around Brisbane worth checking out too.

I spotted some fantastic body art over the weekend using Flickr Leech as well as some truely scary stuff2. My favourite tattoo out of everything I saw by plugging [email protected] into the Group Pool function on Flickr Leech was this massively cute little number. Some people have wonderfully creative ideas about how to permanently scar their bodies, like this chick who has the lyrics to a Bjork song tattooed on her back in braille. That photo was taken at a Modest Mouse concert, which gives me a tenuous link to the second subject of this post: Splendour in the Grass.

The lineup was announced today, and it's exceedingly good. Just enough to convince me that the price increase is worth it. For camping and festival entry this year we're going to have to shell out $259 each. The new ticketing system3 worries me a little and makes me think getting camping tickets could be a bit of a lottery.