Well, the year long adventure has officially begun. We're on our first five hour stop over after an eight hour flight into Taipei. It was awesome to discover the free1 availability of internet, now all I need is power and I've got these five hours totally covered. 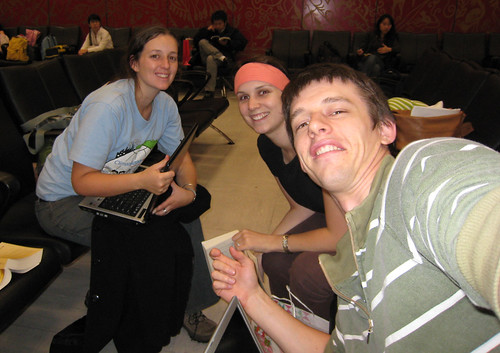 So...back to the waiting.

Frankfurt wasn't as free flowing as Taipei with the Wi-Fi so it's had to wait until now. We finally made it to London a mere 36 hours after we left Brisbane. I am oh, so tired and Laura has already crashed. She thinks I'm waking her up to go get some dinner, but I'm just going to let it slide and crawl into bed too.

I'm going to do my best to make it to a reasonable bed time type time, like 7 or 8 pm. This little update has taken all of 5 minutes, so I've now got to find something else that will take at least 1:55. I don't think it will take that long, but I think Jailbreaking my iPod Touch is going to be next on the "Keep Simon Awake" menu.