I was sitting at work today, talking about Indian saris, and my boss Phil mentioned a sari he'd seen that was the colour electric blue. Of course, being an Australian child of the 80s, I started singing Electric Blues. Suddenly my colleagues were strangers; they did not know the words. They did not know the song. And they certainly didn't have a clue who Icehouse was. A thought came into my head: it's time to go home. So this afternoon, Simon and I paid for our flights back to Australia.

Although it's amazing to think eleven months have passed since we left, it's now feeling a lot like this time last year. We're trying to pack in as much as possible on the weekends and weeknights, meeting up with friends, seeing the sights and attempting to tick off some of our must-sees. The early setting of the sun – about 4pm most days – and the occasional forecast of, you know, Arctic winds, lessens our touristy time. However we're pushing on with gusto. It is merely one month today until we fly to Italy. 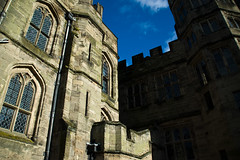 Having got a real kick out of Warwick Castle last time, we went back up there with Susan, Dave and Sarah, with a stopover at the Hartley house on the way. The Castle is owned by the Tussauds Group, so there are amazing wax figures throughout, and lovely views of the town (somewhat dissimilar to Queensland's Warwick) and the River Avon. 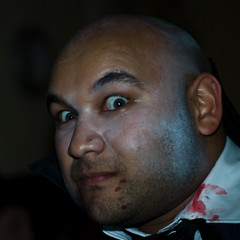 Halloween is a pretty big occasion in the UK and we got into the spirit with a group of friends on a chilly Friday night and a Jack the Ripper walk. You meet at a tube station near Tower of London and join – at least on Halloween – a huge group for a walk through the streets of Whitechapel, finishing at Liverpool Street. It is a really creepy walk, mostly owing to the great guide we had with the booming voice. He took us to spots where bodies were found (now mostly carparks) or where evidence was found (another carpark) and kept us shivering with very grisly descriptions and fascinating facts about that time, exactly 120 years ago1.

There was also a very fun, rowdy Halloween party the next night (best costume prize for mine was Susan as Mrs Lovett from Sweeney Todd, with pie and knife in hand.) Far more dignified, and another thing to cross off my list, was a really special afternoon at the Lanesborough Hotel on Hyde Park. Two friends and I enjoyed a ridiculously expensive, but exquisite, high tea with scones, cakes, and teeny tiny sandwiches. I could get used to that very nicely, thank you.

In search of more scones, we took a trip with Bec, Aaron and another mate Ken to Kent in southern England. Canterbury is yet another super cute little town with cobbled streets and Tudor buildings. The cathedral was particularly impressive; Simon and I think it's one of the nicest we've seen. Despite being told by several people not to bother with Dover, I have always wanted to see the white cliffs. I imagine the cliffs are a touch windy at the best of times, but we were seriously windswept up on the cliff's edge. No railings, just an odd bunch of horses, lots of green grass, mud and then a severe drop down to the beach. The cliffs are breathtaking and Dover was definitely worth the trek.

Nosebleed section has a whole new meaning after being seated in the absolute back row of Emirates Stadium for an Arsenal game last week. Our friends, who are actual fans, had finally secured tickets after two years in London (it's that hard.) It was the equivalent of a Baby Broncos match, with some youngsters mixed in with the regulars, but it was a great atmosphere and a fantastic stadium.

The next morning little bro Nathan arrived for a brilliant, quick visit to London, joining us on a trip to the Barbican arts centre, curries at Brick Lane and another trip out to Amersham with the cousins. It was so good spending time with him before he heads off travelling with Hannah. Han will head back to Oz in time for Christmas, while Nathan will meet up with us and the rest of our very excited little group for our three weeks in Italy. I have CDs to help me become fluent in four weeks.

The three of us took in a trip to the theatre, where Nath saw Wicked and Simon and I saw my most longed-for: Billy Elliot at the Palace Theatre. The night got off to a great start when our seats were upgraded because it wasn't sold out. Which is madness because it was the best musical I have ever seen. I have always loved the film, but the story works magically on stage, with amazing songs by Elton John, extraordinary dancing and direction that gave me goosebumps. I am still in love.

Last weekend another London couple had their farewell before heading back to Oz with a view to entertaining us in style in Sydney one weekend in 2009. Nathan became the eleventh person to make our lounge room home, and in a fortnight, Simon's best mate Aidan will be the twelfth. We can't wait. Best wishes to cousin Katrin who graduates high school today. And hooray for the rain in Brisbane and Toowoomba! The photos I've seen of the storms are incredible. If you get the chance, we would love to hear how your Octobers and Novembers have been. Thinking of you all and hope you're well. Much love, Laura and Simon.