This afternoon1 was one of those afternoons when you step out of the office and everything is gorgeous. It's as though that little box chock full of beautiful stuff which the world usually keeps mostly hidden away has just exploded and there's beauty just dripping from everything.

Looking out my window and watching the clouds roll in from the south-west it strikes me that I don't have an umbrella at work and I don't particularly feel like getting wet. Normally storms make me very excited, but this isn't really a storm, more just an afternoon shower. As the rain eased, I take my opportunity and dash out the door for my trip across the Goodwill Bridge to the bus station2.

The second I open the door I'm hit by the smell. The smell of rain on a warm afternoon has little comparison; I'm almost sure it's my favourite smell. As I'm moving down the stairs as fast as I can I catch little glimpses of the outside world which is producing this wonderful smell. A couple walking down the stairs on their way home from a stressful day at uni (not likely); a few bike riders cruising along and quickly acquiring a soggy feeling between their arse cheeks and a trail of water up their backs; the paving, now illuminated by the water; the light spots of rain still falling on to the glass roof above; and the guy who hasn't noticed any of this because he's too engrossed in the music coming from his headphones and the magazine in his hands. I hit the bottom of the stairs and I'm now definitely free of the office and on my way home. The scene is glorious. The sky is light but filled with deep grey clouds and the trees and grass are a saturated green that only seems to appear after summer rain.

I already know that this is one of those days where it's simply impossible to miss noticing the joys of life, and just as I'm nearing the start of the bridge my MP3 player on random spits out Hotel Song3 by Regina Spektor. I don't think I could have chosen a song to better suit the scene4. The river looks great this afternoon, much better than it often does. The bright sky is being reflected, and as I move out from under the freeway I look toward Southbank to see the sun, just hiding behind one of the deep clouds that are scattered around the sky. It giving the cloud a spectacular outer glow. Beams of sunlight can be seen descending on parts of south Brisbane and West End behind the lager office blocks and apartment buildings that now define the Southbank skyline and mostly obscure Mt Coot-tha.

Having taken in the view to the south-west I turn to my left to take a peek toward the Captain Cook Bridge5. An intermittent, but vibrant, rainbow stretches across the sky from somewhere near the Story Bridge right over the river to somewhere south of The Gabba. 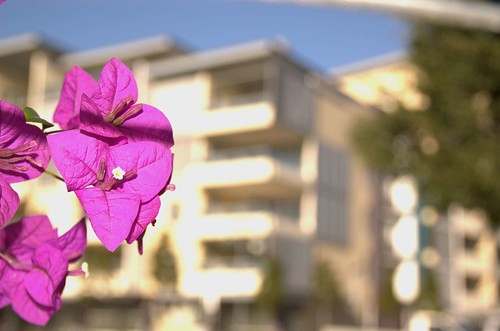 As I continue my journey across the bridge with the rain lightly falling on my face I start to take in some of the people in the scene. There are still bike riders cruising past with wet backs; people stopped to take photos of the sky; and a group of Asian tourists taking photos of themselves under the rainbow. Coming toward me I notice a girl from a distance who is wearing bunny ears. Thinking it unusual, I take a little more notice of her as she passes than I do with most. She seems kind of distracted and maybe a little sad or angry. She passes by without leaving me any clue as to why she wears the ears. It's a strange encounter, but somehow it adds to the scene, makes it feel more dynamic, if that's even possible.

Nearing the end of the bridge there is a wedding party having photos and it makes me think of Laura, who I'm hoping I catch in a half hour or so at the bus stop where she's leaving me the car and heading into the city on the same bus I'll be catching out. I get to Southbank and immediately notice the deep purple of the bougainvillea in full flower. Trying to take in as much of the scene as possible I almost run into part of it. She looks at me as though I'm a little crazy, but that's ok, because I probably do look that way.

As I walk up the hill toward the end of Southbank, I'm getting close to the end of my stroll, where the beauty of the scene gives way to the overcrowded and polluted bus station. What the scene loses in beauty, it usually gains in interest as I get the chance to observe the many and varied people who call this city home. But there are still a couple more good feelings to help wind up this part of my journey home. As I wait to cross the road I look up just in time to see a kid jump right in the middle of a huge puddle, much to the disgust of his mother. The musical accompaniment to my journey is being nicely rounded out by The Panda Band with Fools 'n' Sharks. Just after crossing the road I catch a whiff of the jacaranda flowers and they look wonderful too. It makes me think of exams.

This is a quick profile of a tiny part of my city, Brisbane, on one of its better days. But most days are good in Brisbane, it's just that the beauty doesn't always hit you in the face, sometimes you have to remember to notice it.