Check out what I found still sitting in my drafts. Since I've only just got around to going through my Philadelphia pictures in more detail and choosing the few I actually like for upload to Flickr, this is a good opportunity to post this which should have been posted ages ago. Even if the words below bore you, I'm sure you'll like the pictures. And incase you missed the first part.

Day two started out just like day one except it lacked the threat of having to wear my dirty, stinky, travelled in clothes. That's a plus. 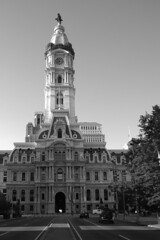 Day two of the course was particularly good (except for a shameless plug by one of the presenters which the organisers subsequently apologised for). I'm not going to focus on the course though because it is work related and we all know what can happen if you blog about work. At the morning tea break the two lovely (and I do mean lovely) ladies I was sitting next to in the course and I went to Philadelphia City Hall and had a look around. We booked a (free) ticket to go up the tower at our afternoon tea break but never made it (my apologies to the excessively talkative man who booked us the time slot).

After the course finished a large group of attendees decided we would go for dinner and someone decided on Moshulu, a stunning boat which houses a very good restaurant. While at Moshulu I was avoiding beer due to (a) the price; (b) the (what I thought was very) late and semi-intoxicating night the night before; and (c) the fact that I had come down with what I thought was a cold and had a very sore throat. While I was busy avoiding beer I was also chatting to one of the other course attendees about all things (mostly politics) that were different between Australia and the US.

After dinner is when things started to actually get interesting, so if you tuned out before now (not that I'd blame you) you've missed most of the interesting stuff. It had just turned dark and the weather was spectacular. It was the kind of night where early in the evening while the sun goes down the temperature turns quickly from "I feel like I need to shower ever three minutes" to "I could sit and watch the sun go down forever". Someone suggested that we take a casual stroll back to the hotel (1/2 hour walk) via a bar or two.

One curious thing about most of the American bars I experienced is that they're all small, maybe one or two rooms at most. We spent what felt like a couple of hours in the first which must have been more like five hours. We decided to leave an head for somewhere new only to realise that everywhere was closing in half an hour. Quickly questioning the locals we met a delightful young greek girl who knew of one place that stayed open for a few more hours and offered to drive us there. So, all four of the guys who were left waited for her car to be brought around and jumped in...next stop: Emerald City.

Emerald City was a striking dichotomy. It consisted of two rooms. The were both packed absolutely chock full of people. The first room played exclusively hip-hop, rap and R&B while the second played exclusively dance music. The music coming from both rooms was pretty awesome, but I have to admit I felt more than a little out of place as a skinny white guy in room one. We danced and made fools of ourselves in front of complete strangers for at least a couple more hours after arriving at Emerald City before it closed at 3:30am. We all slowly made our way back to our respective hotels and I was in bed by 4:00.

All in all it was a great night hosted by some very friendly Americans and one Canadian (who was also friendly).